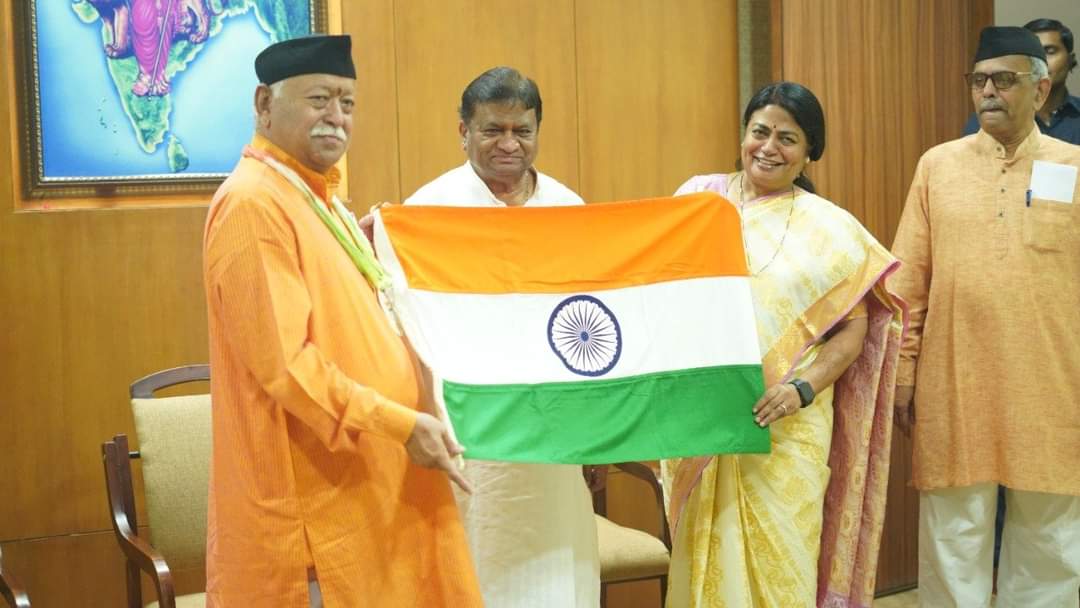 Guwahati: Along with every patriot of Bharat, Rashtriya Swayamsevak Sangh (RSS) chief Mohan Bhagwat hoisted the national flag at its headquarter in Nagpur on Saturday following the nationwide campaign for Har Ghar Tiranga. The largest nationalist organisation in the globe had already extended its support to both Tri-colour festuval and Azadi Ka Amrit Mahotsav commemorating India’s 75 years of independence. Meanwhile, the Nagpur district magistarte R Vimla visited the RSS headquarter and presented a Tri-colour and other mementos to Bhagwat in presence of RSS leaders Ram Harkare, Rajesh Loya, Jayprakash Gupta, Rabindra Bokare, etc.
Respecting Prime Minister Narendra Modi’s call to every Indian for putting the national flag on digital media profile picture, the RSS also replaced its organization’s saffron flag with the Tri-colour. Responding to critical views by the Congress and other opposition parties about the Sangh’s view on Tri-colour, RSS prachar pramukh Sunil Ambekar (during his recent Guwahati visit) stated that the celebration should not be politicised. RSS has been celebrating the sacred day by hoisting Tri-colour in all its offices.
Following initiatives of the Centre and State governments to hoist or display the national flag in all government offices, educational institutes, public sector understandings, banks, commercial establishments and every household from 13 to 15 August to pay tributes to millions of martyrs and freedom fighters of India’s independence movement against the British imperialist forces, the Sangh directed its Swayamsevaks across Bharat to actively participate in the unique initiative.