Ranchi. Ankita Kumari who was set on fire by a person after she did not reciprocate his proposal in Dumka district succumbed to her burn injuries on Sunday. The police said the accused has been arrested. Accused Shahrukh poured petrol on the woman through the window of her home when she was asleep and set her on fire on August 23. She was set on fire in a case of unrequited love. Soon after the incident came to light, people were seen protesting in the streets of Dumka.

A student of class 12, Ankita Kumari had been first admitted to Phulo Jhano Medical College and Hospital in Dumka in critical condition. Later she was referred to Ranchi’s Rajendra Institute of Medical Science (RIMS) for better treatment.

According to media reports, Dumka SP Ambar Lakda said, “The accused Shahrukh has been arrested. We will apply at fast-track court for a fast trial. People are cooperating with us. We appeal to people to maintain peace. The situation is under control and Section 144 has been imposed.” 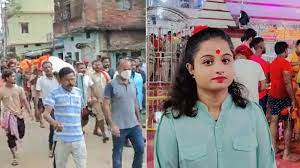 “The state government is serious regarding the murder of a girl in Dumka. Stringent action will be taken against perpetrators. We will ensure a fast trial. We have talked to DC in this regard,” Gupta said.

However, the situation took a drastic turn on Monday the 29th when Ankita succumbed to her burn injuries. Public came out in large number demanding justice for Ankita and in the din of loud protests the last rites of the victim took place Monday morning. BJP MP from Dumka Sunil Soren, Deputy Development Commissioner Karna Satyarthi, DSP Vijay Kumar and many administrative officials, activists and common people of various Hindu organizations participated in the funeral procession.

The same day, the Jharkhand police on Monday arrested the second accused in the Ankita murder case and sent him to jail.

“Naeem alias Chhotu Khan, the second accused in the Ankita murder case, has been arrested. After presenting the accused in Dumka court, he was sent to jail,” Dumka SP Amber Lakra confirmed.

Union minister Arjun Munda questioned the state administration for the death of the girl. He said, “Who is responsible for such incidents? Were appropriate measures taken to save the victim or not? The state government should answer on all these subjects and to maintain the confidence of the public, the government should give a statement that what is the law & order situation for these incidents which are happening in Jharkhand.”