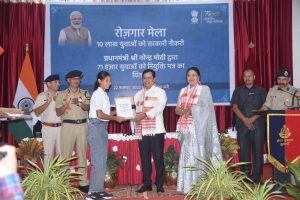 Guwahati: Union ports, shipping & waterways and Ayush minister Sarbananda Sonowal, while addressing the Rozgar Mela, a recruitment drive for 71,000 personnel, at Patgaon BSF headquarter in the city, where total 224 successful candidates were handed over appointment letters, asked them to work for government with dedication and responsibility and with patriotic notion.
He also appealed to the successful candidates to take care of the trust that Prime Minister Narendra Modi keeps on them to build Ek Bharat Srestha Bharat. Sonowal hoped that the youth power that has regained inspiration and enthusiasm will take an important role for building an Atmanirbhar Bharat in the coming days.
It may be noted that candidates from 10 government departments including railway, post, health & family welfare, bank, SSB, ITBP, CISF, BSF, etc were given appointment letters in the Tuesday’s meeting, which was also graced by BSF inspector general Kamaljit Singh Banyal and Guwahati Parliamentarian Queen Ojha.
PM Modi also distributed about 71,000 appointment letters to newly inducted recruits from more than 45 cities across the country under Rozgar Mela via video conferencing. Earlier in October, around 75,000 appointment letters were handed over to newly inducted appointees under this initiative. He stated that the Union government is seriously working to provide employment to the aspirants.