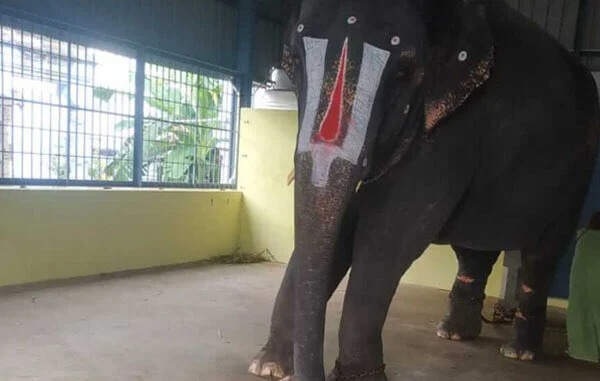 Guwahati: Assam’s elephant Joymala (also known as Jeymalyatha), which is in the custody of a Tamil Nadu temple, is still shackled in chains on a hard concrete floor, claims People for the Ethical Treatment of Animals (PeTA) India. The pro-animal organisation, which brought Joymala’s matter to the public in October, also added that the female elephant is kept in complete isolation from others of her kind.
Taken away from Assam, Joymala is presently in the custody of Srivilliputhur Nachiyar Thirukovil temple in Tamil Nadu. Even though the State’s Hindu religious and charitable endowments department claimed that Joymala was absolutely fine, PeTA India through its latest video evidence refuted the claim and also asserted that the elephant has not been returned to the custodian in Assam even though the permit to stay in Tamil Nadu already expired.
PeTA India affirms that Joymala is living with deep wounds on legs indicating her long-term chaining. After a veterinary inspection visit was made to Joymala in July, the organisation submitted a report to Tamil Nadu officials explaining that her feet are painfully infected and Joymala was controlled with pliers. She is forced to live on unhealthy surfaces that lead to infection and osteomyelitis. It also noted that no visitors are allowed to enter the area where Joymala is now kept.
“PeTA India’s investigation shows Joymala is living a miserable life of pain and fear, denied the opportunity to move around freely or to socialise with other elephants. Enough is enough. It is high time for Joymala to be seized and sent to a rehabilitation centre, where she can feel safe, recover from her trauma, and be in the company of other elephants,” said the organisation’s campaign manager Radhika Suryavanshi.
Meanwhile, Assam environment & forest department is also seeking directions for the transfer of abused Joymala back to the State from Tamil Nadu through Gauhati High Court. However, PeTA India recommends Joymala be sent to a specialised rehabilitation centre skilled in handling abused elephants, as approved by the Union government’s Project Elephant division, where she can live unchained and in the company of other elephants.
Abused elephants are dangerous as many may retaliate, asserted PeTA India, whose motto reads animals are not ours to abuse in any way. According to figures compiled by Heritage Animal Task Force, captive elephants killed over 525 people in Kerala in 15 years. There are a number of incidents across India where frustrated captive elephants attacked mahuts (caretaker/operator) to death. In recent times, Deivanai (also brought from Assam) killed the mahut at Subramaniya Swami temple and Masini did the same at Samayapuram Mariamman temple.