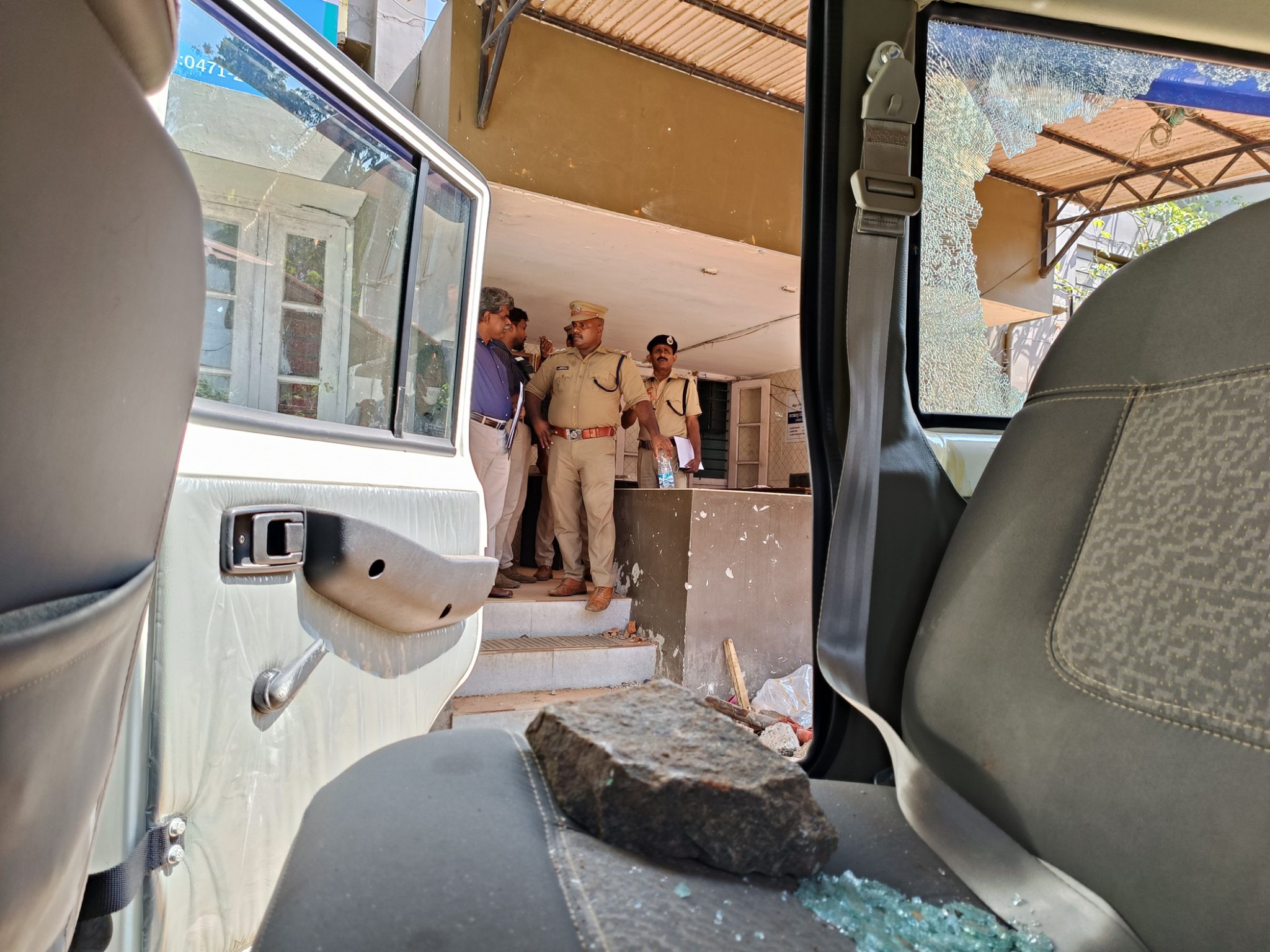 There are reports of largescale conspiracy to set fire to Vizhinjam Police Station. Intelligence department is reported to have got information that the conspiracy was to set fire to the police station, unleash violence against police force; small core groups were formed under the auspices of Coastal Watch an organisation of the anti-Vizhinjam port authorities led by Latin Catholic Church. WhatsApp Groups were formed too for the same purpose. There was a sinister move to ’create’ a martyr.

More than thousand people rushed to police station as soon as the news spread about the arrest of five agitators. Police FIR also says that the agitators’ target was to set fire to the police station. FIR says, the attackers shouted that they would set fire to the station if their ‘fellow believers’ are not set free. Their aim was to ‘liberate’ their fellow men. They carried lethal weapon and rallied women and children on front line as human shield and kicked off violence. 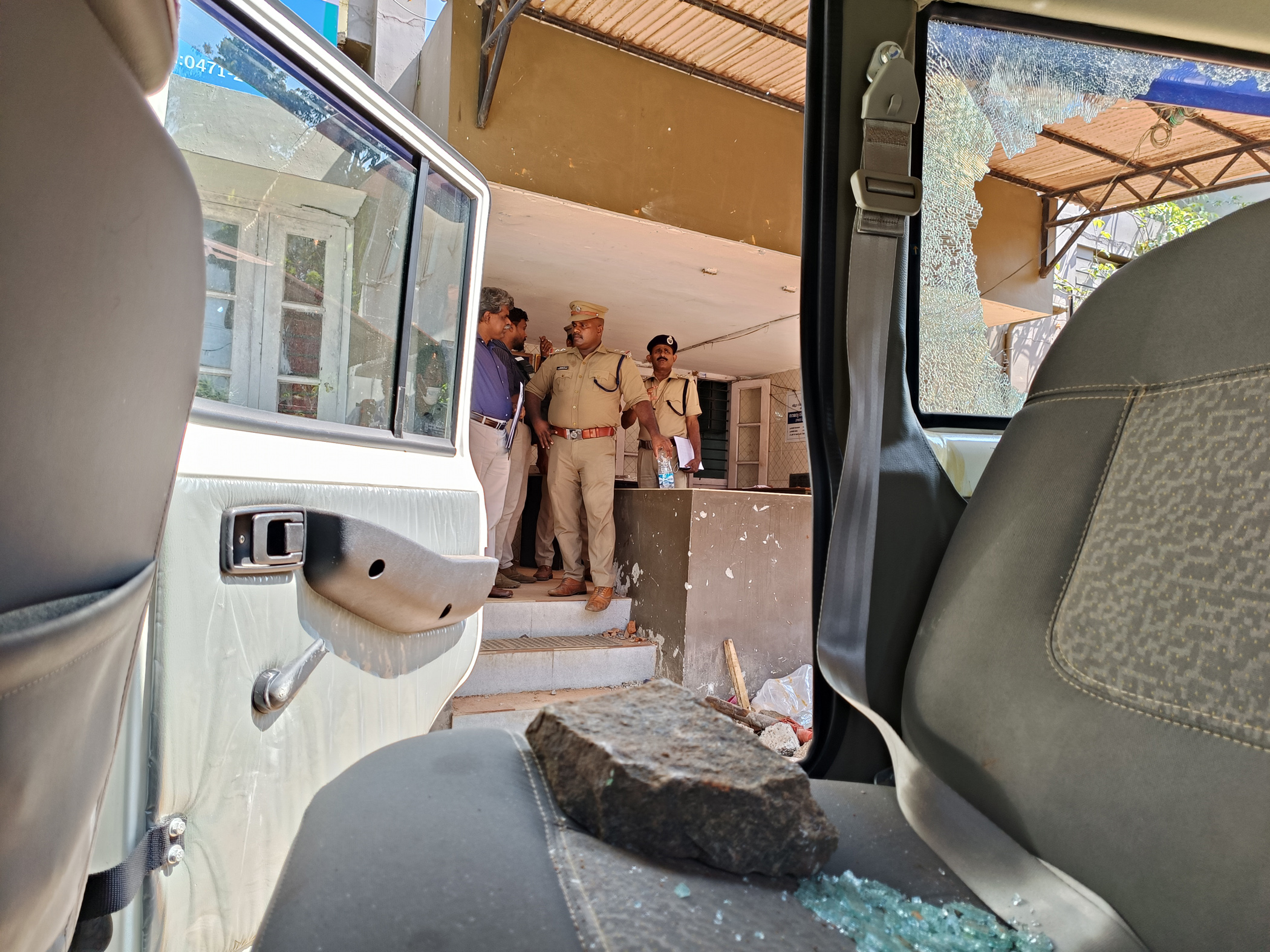 Visuals that unveil the conspiracy also has come out. It shows Latin Catholic Arch Diocese leader Theodosius’s call for setting fire to the police station. He shouted that come what may, let court or someone else say whatever they want, if arrested, police station will be blazed. He reminded the blazing of Anchuthengu Police Station. A clear threat. Theodosius is seen making the women shout that station would be blazed. They turned the CCTV cameras, installed near the police station, to opposite directions so that they would fail to take pictures of the violent scenes. Mobiles were smashed when some people tried to take pictures of the violent mob.

Reports suggest that according to the information gathered by Intelligence department, Coastal Watch had formed small core groups to unleash violence. These groups are meant to run violence and mobilise men fast. WhatsApp groups are active too. Purpose is the same. These group leaders attacked the natives on Saturday night. There are designs to make women and children martyrs. Another report is plot to create communal riots. Several Hindu houses were attacked the other day.

Another report regarding FIR is Rs 85 lakhs loss in connection with the Latin Catholic Arch Diocese’s attack on the police station. It is in the light of the broken vehicles and window glasses. But, it does not include the damages caused to the vehicles of the individuals and the Kerala State Road Transport’s (KSRTC) vehicles, destruction of the cameras of the media person, etc. Apart from the above, several CCTV cameras and shops were attacked leading to huge losses. They are not at all included in the FIR. Serious charges like attempt to murder were included. But police have not included them in FIR.

Even though state government had convened a Peace Conference on November 28, 2022, no positive decisions came out from it. Church still sticks to its gun. Interestingly, despite an ugly incident took place in the capital, Chief Minister shied away from the Conference. Later on, CM’s cabinet colleague G.R. Anil who represented the government in the Conference said that all except the agitation council, read, the Church, supported the demand for the earliest completion of the project.

But the people have their own doubts about the sincerity of the government in this matter. Five were arrested and four of them were released on station bail and one has been remanded. BJP has attacked this sort of soft approach of the government towards the attackers. How can a government release the accused in the case for police station attack, public and private property destruction, on station bail?

Now, police brass has declared state wide alert in all police stations, especially those in coastal area. Officers would not get leave unless on emergency grounds. Forty policemen injured, still no action against agitators or the Latin Catholic priests. Case has been registered against 3000 people including 50 priests, reports suggest. Still government is soft. The question arises if government plays double standard. They say that the completion of the port construction is a must, but no strict action against violent rioters. Hunting with the hound and running with the hare! And, no action against the rioters who vandalised the satyagraha pandal of the group who demands the earliest completion of the port construction. Is government practising ‘run with the hare and hunt with the hounds’ policy, people ask.

BJP has demanded the deployment of central forces to keep law and order under the control since the state government has been proved to be utter failure. It is to be noted that Kerala High Court has asked the government to maintain peace.

– Why did the Church wait until the last moment to come out against the port construction and wait until it reached very close to the completion?

– Why did former Arch Bishop Soosa Pakyam choose to oppose the port who was a strong supporter of the same until recently?

– Is it not a fact that no Latin Catholic lives in the project area hence none of them evacuated from there?

– Is it not a fact that the evacuated people are not Latin Catholics and they are not fishermen as such, but the clam collectors? And, they accepted the compensation from the government and moved out.

– Is it not a fact that the agitators are brought in from other places than the project area and vehicles deployed for it?

– Are the anti-port groups getting any monetary benefit from any vested interest within the country or abroad?

It should be remembered that if Vizhijam port is materialised, China is going to be the largest loser as it will reduce the business of Hambantota International Port, Sri Lanka, at least by approximately by 50 %. Why should China lose? Yes, China has invested $ 1 billion for its construction. And, Chinese government is the ultimate controller of the port. Majority of its transhipment business comes from Bharatiya cargo. So, just imagine what will be the loss of that port when Vizhinjam materialises! So, none is to blame if he or she suspects a Chinese hand behind the anti-Vizinjam agitation.

Ruling CPM’s pro-China postures are too early to forget. Few years back, when China was creating troubles in Doklam and Galwan and our soldiers were defying death for guarding our borders, CPM leaders kept on stating that USA had formed an axis with Japan, Australia and India to weaken China. Can we blame one if he says that Pinarayi’s soft approach towards Vizhinam agitators have something to with this China policy of CPM?